Home Computer Notes Basic Computer Network Components (Hardware and Software)
A network is basically a sharing of information via network components. So, the network component plays a major role in designing and maintaining a network. 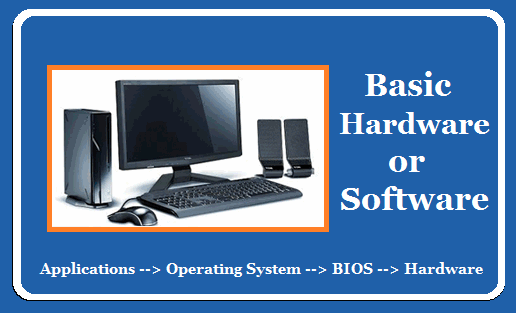 NIC  is a hardware accessory that provides a computer with both a physical interface for accepting a network cable connector and the ability to process low-level network information.
In Ethernet networks, each network interface controller has a unique Media Access Control address which is usually stored in the card’s permanent memory. MAC address uniqueness is maintained and administered by the Institute of Electrical and Electronics Engineers (IEEE) in order to avoid address conflicts between devices on a network.
The size of an Ethernet MAC address is six octets. The 3 most significant octets are reserved to identify card manufacturers. The card manufacturers, using only their assigned prefixes, uniquely assign the 3 least-significant octets of every Ethernet card they produce.

A repeater is an electronic device that receives a network signal, cleans it of unnecessary noise, and regenerates it. The signal is re-transmitted at a higher power level, or to the other side of an obstruction so that the signal can cover longer distances without degradation.
In most twisted pair Ethernet configurations, repeaters are required for the cable that runs longer than 100 meters. A repeater with multiple ports is known as a hub. Repeaters work on the physical layer of the OS I model. Repeaters require a small amount of time to regenerate the signal.
This can cause a propagation delay which can affect network performance. As a result, many network architectures limit the number of repeaters that can be used in a row.

A network bridge connects multiple network segments at the data link layer  of the OSI model to form a single network. Bridges broadcast to all ports except the port on which the broadcast was received.
However, bridges do not promiscuously copy traffic to all ports, as hubs do. Instead, bridges learn which MAC addresses are reachable through specific ports. Once the bridge associates a port with an address, it will send traffic for that address to that port only.
Bridges learn the association of ports and addresses by examining the source address of frames that it sees on various ports. Once a frame arrives through a port, the bridge assumes that the MAC address is associated with that port and stores its source address.
The first time a bridge sees a previously unknown destination address, the bridge will forward the frame to all ports other than the one on which the frame arrived.

A network switch is a device that forwards and filters OSI layer 2 datagrams between ports based on the MAC addresses in the packets. A switch is distinct from a hub in that it only forwards the frames to the ports involved in the communication rather than all ports connected.
A switch breaks the collision domain but represents itself as a broadcast domain. Switches make decisions about where to forward frames based on MAC addresses. A switch normally has numerous ports, facilitating a star topology for devices, and cascading additional switches.
The term switch is often used loosely to include devices such as routers and bridges, as well as devices that may distribute traffic based on load or based on application content.

A local operating system allows personal computers to access files, print to a local printer, and have and use one or more disk and CD drives that are located on the computer. Examples are MS-DOS, Unix, Linux, Windows 2000, Windows 98, Windows XP etc.

The network operating system is a program that runs on computers and servers and allows the computers to communicate over the network.

Servers are computers that hold shared files, programs, and the network operating system. Servers provide access to network resources to all the users of the network.
There are many different kinds of servers, and one server can provide several functions. For example, there are file servers, print servers, mail servers, communication servers, database servers, fax servers and web servers, to name a few.

I hope this will surely help you. If you have any questions or problem let me know. Have some suggestion about this post comment below.

What is Cyberbullying & How to Avoid It?

This site uses Akismet to reduce spam. Learn how your comment data is processed.